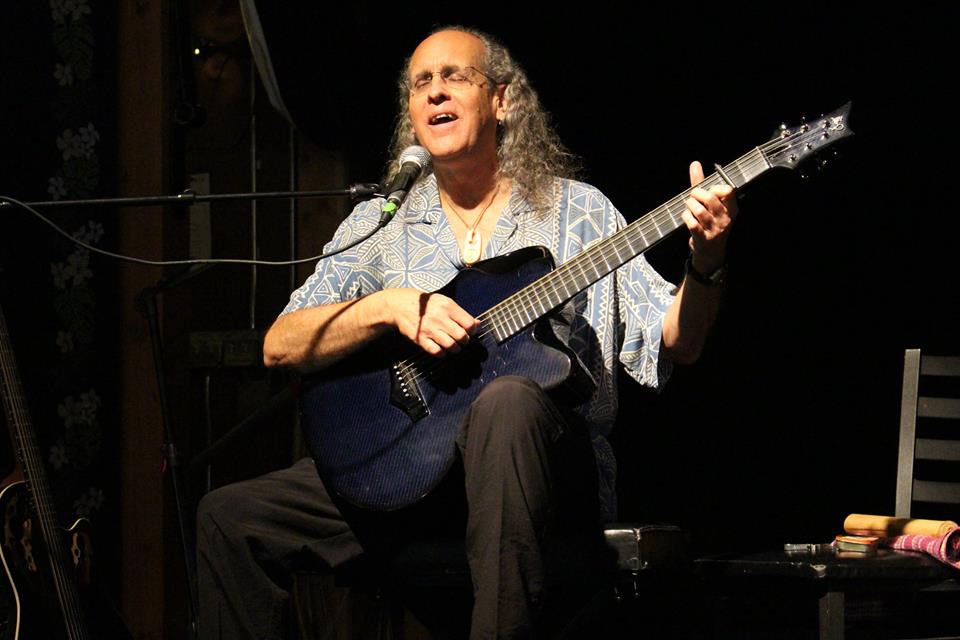 Pili Moreno is a traditional healer, musician, ceremonialist and teacher of Hawaiian spirituality who is spreading the experience of Aloha with his X20 Artisan.

Based in Berkeley, California, but also living part-time in Ashland, Oregon, Pili first discovered Emerald Guitars on the MacNichol Guitars Forum. Pili’s custom X20 Artisan was the first to be built in the cobalt blue colour and holds a very special place in the Hawaiian’s island heart. He said: “I have named her Ke-kai-lipo-hoʻohui-nā-moku, which means ‘The deep blue-black ocean that unites the many lands’.

“It comes with me every month as I travel between Berkeley and Ashland. It’s my main performing guitar and has been used on every performance since I received it, from restaurants to hula competitions, around Northern California and Southern Oregon. It will be going with me to the Big Island of Hawaiʻi in November 2015. No formal gigs scheduled there this time, but I will be jamming and sitting in on other artists’ gigs.

“It wasn’t designated as either an Artisan or Opus model, but was fitted at my request with full gloss Cobalt Blue finish, Gotoh 510 tuners, adjustable truss rod, and K&K Pure Mini pickup (passive, no onboard preamp).”

Six months after receiving his X20 Pili wrote a review of his new guitar for the MacNichol Forum and, even after all that time, he said he was still’ looking at this thing and admiring its sensuous-yet-purposeful curves’.

“It seems smaller than you’d expect when you hold it, and moulds itself very comfortably to your body. The arm-rest bevel, the offset to lower side that rests on your knee, and the shape of the back all contribute to its comfort.

“Visually, I especially enjoy the details of the offset sound hole’s shape – an aesthetic touch that reminds me of the mouth of some carnivorous plant. And somehow all this asymmetry and non-parallelism come together to make a coherent whole. The construction quality is very impressive. It’s hard to imagine that something so precise and refined and technically demanding came out of a little workshop in the countryside of Donegal.”

Pili said one of the first things he did after receiving his guitar was something that he thought was ‘pretty daring and dangerous’ – he compared his X20 to his 1965 Brazilian rosewood Martin D-28. “I realised that I was taking the chance, that the comparison would highlight any weakness in the Emerald’s sound and that I would end up feeling disappointed with my new guitar.

“I am happy to say, that although there is definitely some very special magic in the sound of an almost 50-year-old Brazilian dreadnought, I am still very happy with the sound of the X20 Artisan after the comparison test.

“Actually, the comparison showed me how impressive the X20 Artisan really is. It has surprisingly satisfying bass for its size – perfect for the tunings I use – plus great presence at the high end, and really nice clarity and balance through its whole range. Just a very pleasing and usable sound overall.

“This is a versatile, road-worthy, eye-catching charmer, and a fine value. I know Alistair was concerned that he’d gone too far with this fairly radical concept, but I think that the choices he made in designing this instrument were visionary, and to me at least have proven highly successful. I’d call it a breakthrough,” he wrote.

Pili is of Filipino, Spanish, and Celtic ancestry, and Hawaiian by adoption. Pili’s father moved from the Philippines to the Hawaiian island of O‘ahu in the 1930s. He later settled in California, where he met Pili’s mother, who was originally from Massachusetts. Pili was born and raised in California and spends much of his time in the San Francisco Bay Area and Southern Oregon.

Pili is the hānai (adopted) son of Aunty Bea Perin, originally of Niumalu, Kaua‘i. Aunty Bea is the daughter of Makaleka Nakapuahi of Keaukaha, Hawai‘i Island, and Albert Christian of Waimea, Kaua‘i. She is related to the famous Hawaiian songwriters Helen Lindsey Parker and Alfred Alohikea, and is the niece of Aunty Emma Kāne, a prominent Kaua‘i Kahuna Lapa‘au (master healer) of the early twentieth century.

From Aunty Bea, Pili has learned much about Aunty Emma’s work. Both of these kūpuna (elders) are a continuing source of inspiration and understanding for him. Aunty Emma gave him the name ‘Unihipiliowailelepualu, through Aunty Bea, as an inoa pō (name given in a dream).

“Even a straight musical performance offers an opportunity that I refer to as ‘sharing Aloha through music’. My intention is to do more than just entertain by empowering the music with the experience of Aloha (universal love).”