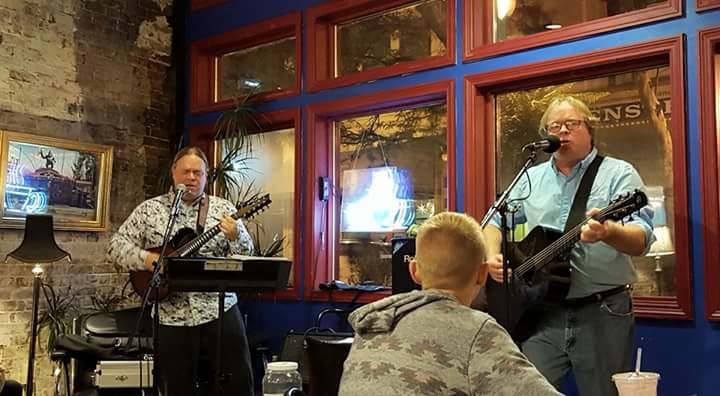 A West Virginia-based customer’s 10-string custom Amicus is a great example of the possibilities available from Emerald Guitars Custom Shop.

Greg Wegmann from Charleston, West Virginia is a lifetime musician who supports his habit by working in IT at a local hospital.

Charleston is the capitol of the Mountain State; A small town compared to other large cities in America (roughly 50,000), and sometimes Greg feels like he is living in The Shire with all the natural beauty found between the mountains.

He said: “There are two rivers flowing through Charleston, the Kanawha and the Elk. There is a rich history here so my brother Tony and I tap into that a write songs about the area. Our current CD is call Past and Present covering songs about us growing up in Charleston, WV and some of the landmarks.

The owner of a custom 10-string Amicus first came across Emerald Guitars while researching carbon fibre guitars on the internet. He said: “I searched Composite Acoustics on Google after learning about them. Some friends had purchased other brands and I got interested in the properties they were made from. I found Emerald in this search and was blown away by the customisations.”

Greg loves ‘the sound, feel and perfect intonation’ and the beauty of the wood underneath the glossy top of his custom Amicus. “I often get asked ‘What is that?’ when playing the cuatro (Latin American instrument) and even more so since I got the Amicus from Emerald. “I mentioned it (the Amicus) on local radio station last Tuesday night and again on the singer/songwriter stage, which was recorded for future broadcast.

“Greg first encountered the cuatro on a trip to Puerto Rico and fell in love with the sound. I mainly played an electric guitar and only owned one acoustic, a 75 Gibson Gospel which I still own. The 10-string custom is configured like the Puerto Rican cuatro that I have played since the 90s. The wood used in the PR cuatro does not handle the humidity of West Virginia as well as I would like and loses intonation when I play up the neck. The Emerald Amicus plays perfectly all the way up the neck and sounds great!”

“I once played my cuatro in the Deep South of South Carolina at a Bluegrass Open Mic in a Southern Baptist Church where most of the ladies were dressed in their Sunday best. In the middle of the performance one of the older ladies stood and said ’ know what he’s playing and I know what that instrument is, but what is that fellow playing?’.

“I explained my purchase of the instrument in Puerto Rico and noted that they were used for Christmas music and were now accepted in Bluegrass circles as a mandolin substitute. She smiled, accepted the answer and danced for the rest of the show,” he laughed.

We love hearing from our customers. If you would like to be featured in our series, send us an e-mail to info@emeraldguitars.com with the subject ‘Emerald Stories’.

Yvette is a customer who knows exactly what she wants