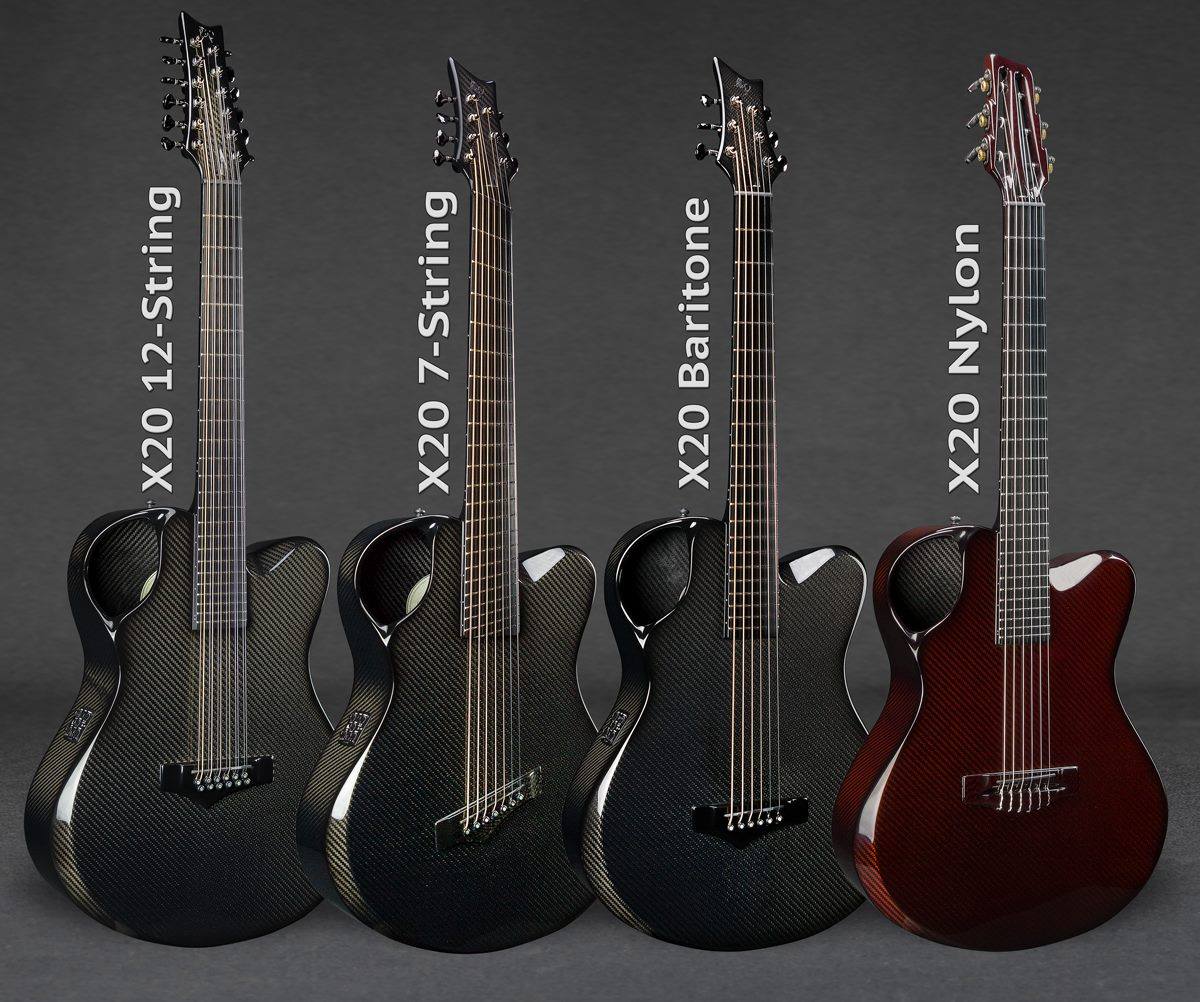 We promised you that 2016 would be a big year for us and revealed on New Year’s Day that we will be adding new models to Emerald Guitars Range.

We are delighted to officially announce the first four of our new additions today – the X20 12-string, 7-string, Baritone and Nylon.

Previously these were all available as upgrade and custom options, but the demand for them grew so much that we decided to add them to the standard range. A few weeks ago we announced that we have added the X20 as a Lefty to our standard range, so left-handed guitarists will be pleased to know that all of these new options are also available to you!

The X20 is the perfect platform for going beyond the standard 6-string and is the best sounding 12-string we have ever heard. Greg Hager in North Dakota received his X20 Artisan Woody 12-string before Christmas is enjoying ‘Everything’ about it, from its clarity to resonance. “I have never played a guitar that has better tonal resonance. I am absolutely stunned at the craftsmanship and the beautiful use of the tinted carbon fibre.’

Seven string guitars have very much grown in popularity in recent years, so much so that we decided to add the X20 7-string to our standard range. Ian Wroe, a professional Jazz musician from Huddersfield in the UK, called to Emerald Guitars HQ in November, 2015 to pick up his first acoustic 7-string, a green X20.

When Ian made the decision to search for an acoustic 7-string, he knew it would be difficult, and mostly expensive, to buy a traditionally built 7-string acoustic. “I had seen RainSong and looked around at other compound guitars and I kept hearing more and more about Emerald Guitars.”

We have found as a Baritone the X20 has very powerful bass and still great balance across the other registers. A baritone is a guitar with a longer scale length so it can be tuned to a lower pitch.

While no standard tuning has been established for baritone guitars, popular tunings for the instrument are: a perfect fifth (A D G C E A), an augmented fourth (Bb Eb Ab Db F Bb), a perfect fourth (B E A D F♯B), or a major third lower (C F B♭ E♭ G C).

In the earlier days of the Emerald Guitars range Alistair concentrated on steel-string acoustics and felt that carbon fibre wasn’t a good material to make a traditional, classical nylon-string guitar.

But after making his first nylon-string in 2002, Alistair kept being asked more often to build them, in particular by Evan Blythin in Nevada, well-known to online guitar forum community. Things really changed for us when we discovered that the X20 was the perfect platform for a nylon-string guitar.

The X20 has a really big voice, and with the modified lattice braced top Alistair developed, it has a huge bottom end, but still has good treble notes. We find it sounds great for jazz playing or somebody who is looking for a crossover.

Alistair said: “The carbon fibre helps on the treble side that sometimes gets lost on nylon strings. Our X20 Nylon has a very non traditional sound, it definitely doesn’t sound anything like a normal wooden nylon-string guitar, so I’m not building them for classical players.”

If you have a query on any of our products in the Emerald Guitars range, contact us any time via e-mail sales@emeraldguitars.com, Facebook: ‘Emerald Guitars’ or Twitter: @EmeraldGuitars