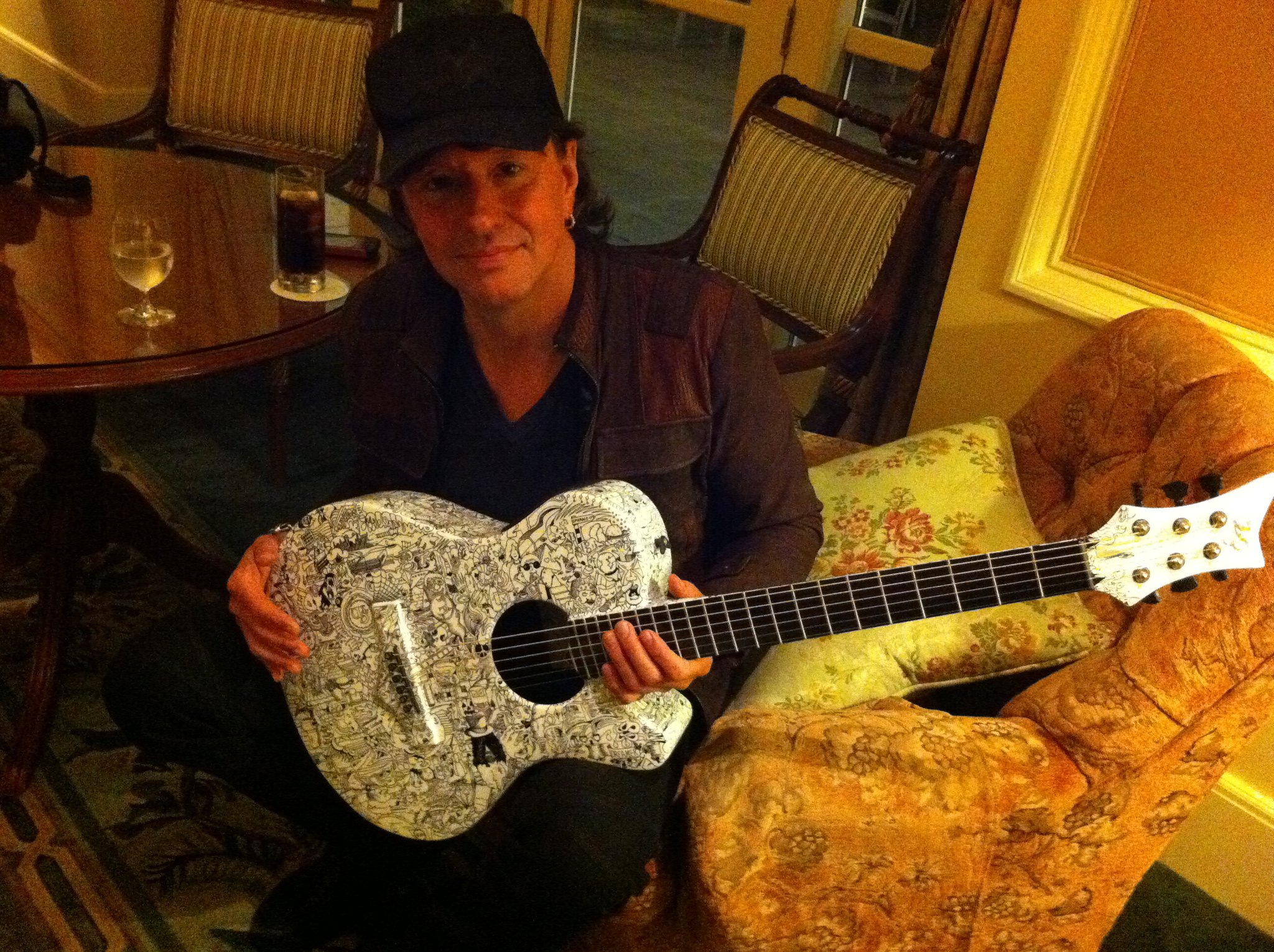 Have you ever wonder how it came about that Alistair decided to build his first ever carbon fibre double neck acoustic, the Chimaera? As a special Throwback Thursday treat, we have the full story for you.

It was actually a conversation with a legendary rock guitarist, known to play the ‘odd’ double neck, that was the inspiration behind Alistair’s decision to build his first Chimaera.

Having been invited by Bon Jovi to attend one of their Dublin concerts in the RDS arena in 2012, after building an acoustic bass for band member Hugh McDonald, Alistair struck up a conversation on double necks with Richie Sambora over dinner after the gig. The former Bon Jovi lead guitarist’s name is of course synonymous with double neck guitars and inspired Hay to go home to Donegal and build his first double neck.

Double neck guitars are a rare breed and double neck acoustics are even rarer. They have tended to be heavy, awkward beasts with poor tone and playability, so it seemed like the perfect challenge for Alistair to focus his design skills on.

Alistair spent much of 2012 developing the initial concept and design of his double neck and then 2013 saw the Chimaera released to gain feedback and refine the design further before addition to the standard range the following year.

“We believe firmly in the structural and tonal benefits of carbon, but in a high tension instrument like a double neck, carbon absolutely excels and allows us to do things that just aren’t possible in wood.

“The Chimaera double neck acoustic is made using our unique one-piece moulding technology, making it incredibly strong and stable with absolutely no joints to fail. This strength allows the guitar to be lighter in construction with a top that is delicate and responsive, yet stiff enough to resist the pull of all 18 strings.

“Carbon has also allowed us to create a much more ergonomic design with a slim-contoured body that fits comfortably to your body, whether playing on your knee or with a strap. And with the staggered design it puts each neck in exactly the right place as you transition between them. The necks also have a full carbon construction with integrated truss rods and slim easy to play profiles to give the easiest and most stable playing experience.”

Our double neck acoustic is also a great platform for customisation, with just about any configuration of necks possible. “Until now a double neck may have seemed like a crazy idea,  but what if you could bring your favourite 6 and 12-string to every gig while only carrying one case. With the Chimaera that possibility is a reality.

“I hoped to get to see him (Richie) at Bon Jovi’s next concert at Slane, but unfortunately he was no longer in the band, so I never got the opportunity to see him again and show him what he had inspired me to make.”

Who knows, maybe Alistair will get the opportunity to show Richie what he inspired, yet. Alistair added the Chimaera to our range in 2014 and since it has proven hugely popular with our customers. Go to our Emerald Custom Shop Portfolio and check out some of the cool personalised Chimaeras we have built.

Emerald Guitars take you on The Session