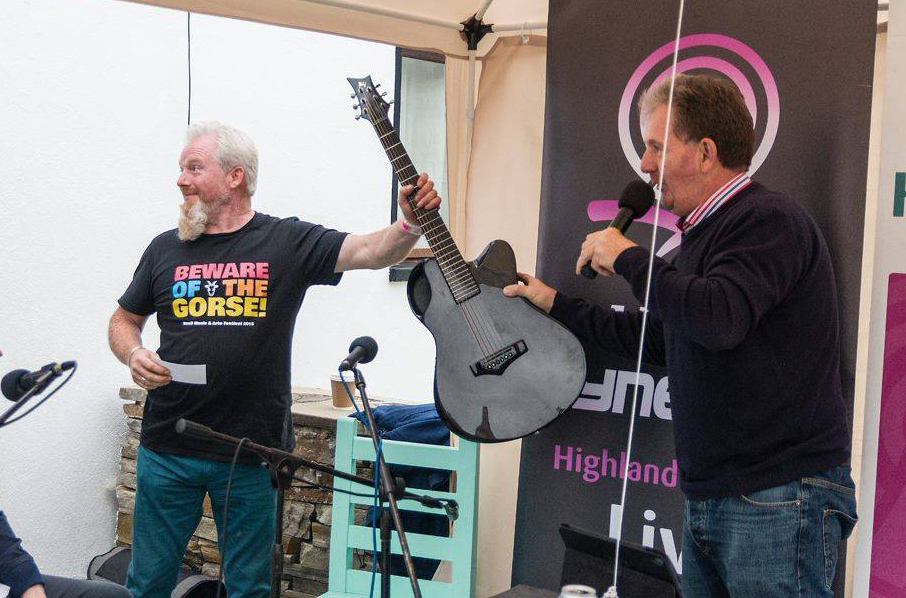 This Monday night (IST), October 10 we are delighted to be featured as special guests on Highland Radio and you will be able to listen in live worldwide on the internet.

Alistair and some of his good friends from the music scene her in the north-west will be featured in an hour-long radio broadcast dedicated to the work of Emerald Guitars on Highland Radio, Ireland’s No 1 local radio station.

This will be part of the weekly two-hour show, Monday Night Sessions with Paul McDevitt, produced by Jimmy Stafford. Paul and Jimmy have shown great support to the Irish music scene as a whole since they first started the programme.

We have worked with the broadcasters on a number of occasions, including their live broadcasts from The Swell Music & Arts Festival on the island of Arranmore off the coast of Donegal (See Photo: John Muldowney and Paul McDevitt during the 2015 broadcast) and it’s a huge honour for us to be invited onto the Monday Night Sessions.

Coming along to the studio with Alistair  to play a few songs on our Emeralds will be a musicians well-known to our YouTube channel followers as some of the performers we have called upon in the past to demonstrate our instruments for you.

They are: John & Pat Muldowney, Michael Gillespie, Mark Black and Simon McCafferty. We are also delighted to have Tommy Callaghan joining us. Not only is he the man responsible for our new website, Tommy is also a highly-regarded singer/songwriter.

The Monday Night Sessions with Paul McDevitt airs from 9 to 11pm IST, Highland Radio.  Listen in worldwide on www.highlandradio.com and join in the live conversation on Facebook and Twitter. We hope you can join us!