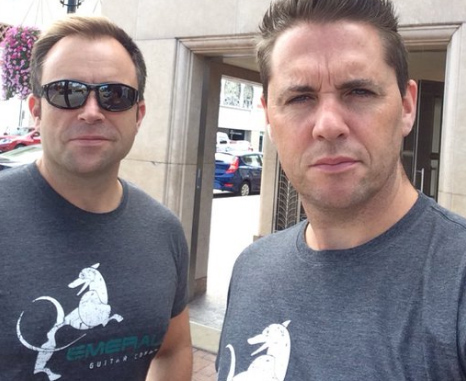 Last month we presented well-known singer, and member of popular Irish folk group The High Kings, Darren Holden with an X20 Artisan to take on tour across the United States with him.

When he first got the X20 Artisan, Darren was already in awe of the guitar and, needless to say, he has been having a lot of fun with it while on tour with the High Kings as you can tell from his hotel room sessions and tweets.

Speaking from Kansas City, the High Kings singer said he has been like ‘a kid on Christmas morning, every day!’ since receiving the Emerald X20 Artisan.

“I love it! It’s the most incredible and inspiring instrument I’ve played in many years. Music seems to seep through it to me. I am playing and writing music that I didn’t think I had in me. That’s 100 per cent honest.

“I’ve written eight new songs in a few weeks and that’s all down to the beauty of the X20 Artisan. I can’t seem to put it down; I don’t want to put it down. It’s like it wants me to play it non-stop, and I’m very happy to do that!”

It’s also great to see that the fans of the group have also taken to Darren’s guitar and it was them who encouraged him to record a second song, following the success of the first.

The High Kings have just completed another leg of their US tour and will return to Ireland for a few weeks to pre-record a television special and also perform on three Irish dates, The INEC Killarney (September 9), Theatre Royal, Waterford (September 11) and the Maritime Hotel in Bantry, Co Cork (September 17) before heading Stateside again until the beginning of October.

If you would like to keep posted on how Darren is getting on with his X20 Artisan, you can follow him on Twitter, where he is always putting up fun posts, including this one where Darren and Brian Dunphy were ‘repping’ Emerald Guitars on a day out in Kansas City, Missouri, this week!

@HKBrianDunphy and I promoting @EmeraldGuitars today in Kansas City. The amount of people asking about tees stunning pic.twitter.com/7FWlXSeuNc