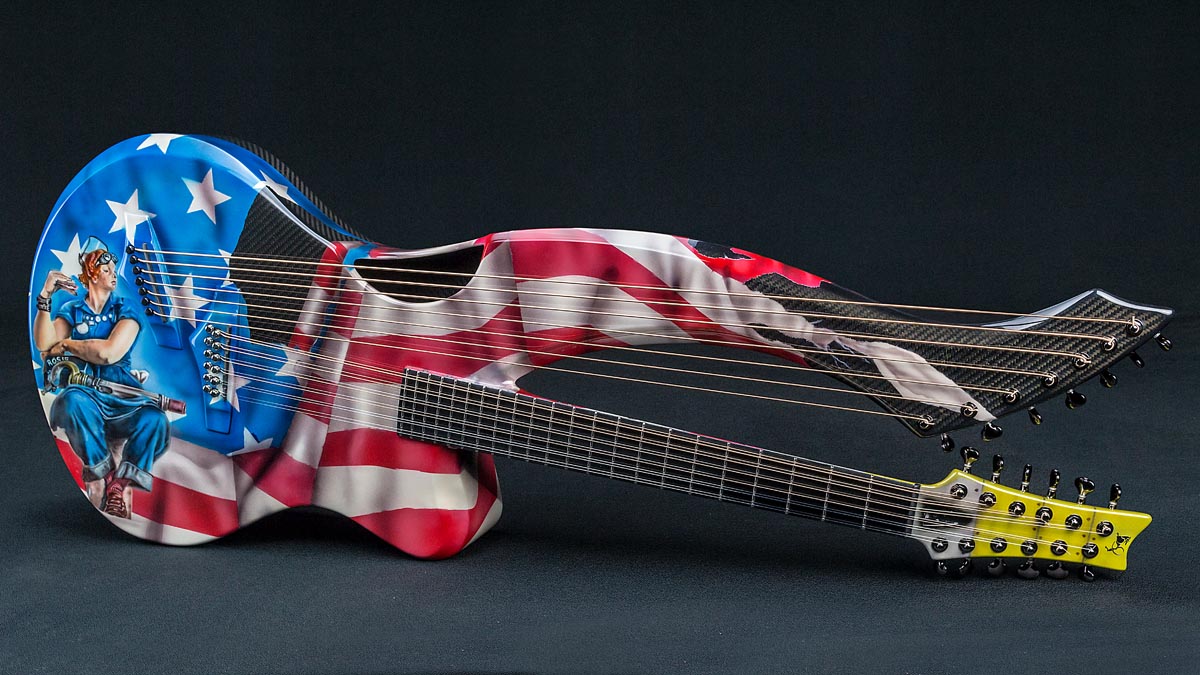 John, a retired USAF aircraft structural technician (of 15 years), is no stranger to the Emerald Guitars Custom Shop. “Rosie is my 4th Emerald guitar. My guitars are way fancier than my playing.” John’s first Emerald guitar was a custom Chimaera: red, blue, and silver with a standard 6-string and baritone 6-string fanned fret. His second was a June 2017 Select Series Amicus, and his third was a fanned fret X7 Woody. But it wasn’t until John’s fourth Emerald guitar that his “Rosie” concept came to life. It was sure worth the wait.

“I took up guitar at age 50. I was in the USAF for 15 years as an aircraft structural technician, so when I saw a friend’s composite acoustic carbon fiber guitar, I was intrigued.” John then found out about Emerald Guitars online, “so I contacted Alistair concerning his custom work, and was pleased by his responsiveness. I asked about Emerald owners in my region and he connected me with someone in Chicago. I made arrangements to visit with him to look at and play his custom fanned fret Chimaera as that’s what I was interested in at the time.”

“At some point Alistair sent me pictures of “The Star-Spangled X20” painted by artist Phil Atkinson. As an aircraft structural technician, ‘Rosie the Riveter’ is kind of an icon in my line of work. My favorite version of Rosie is the Norman Rockwell painting which has a flag background, so I started thinking of a ‘Rosie’ guitar.”

“I traveled to Ireland in April of 2017 to visit Emerald and get some concepts down for a ‘Rosie’ Amicus which is what I was thinking at the time. I loved the shop and the crew, and Alistair treated me like I was some famous guitar player! I actually put a deposit on the ‘Rosie’ Amicus project, but then ended up buying a June 2017 Select Series Amicus and putting the ‘Rosie’ concept on the back burner.”

“I revived the ‘Rosie’ concept in early 2018 thinking about a Synergy X7, but I was talking to Alistair about modifying the design with an offset soundhole like the Synergy X20. Alistair recommended that we do a full Synergy X20 since I wanted a 12-string for the main neck. Phil Atkinson did an incredible job on all the artwork. The 8th Air Force Emblem back art is in honor of my dad who served in the 8th in England during WW2 and 9 years of my own USAF career which was also in the 8th.”

“The ‘unveiling’ at Emerald in 2018 during the Bumblefoot Music Camp was awesome. And having Ron Thal there and be the first to play Rosie was also amazing. Even better was being able to momentarily confuse Ron with a guitar.”

Watch the unveiling of “Rosie” at Emerald Guitars