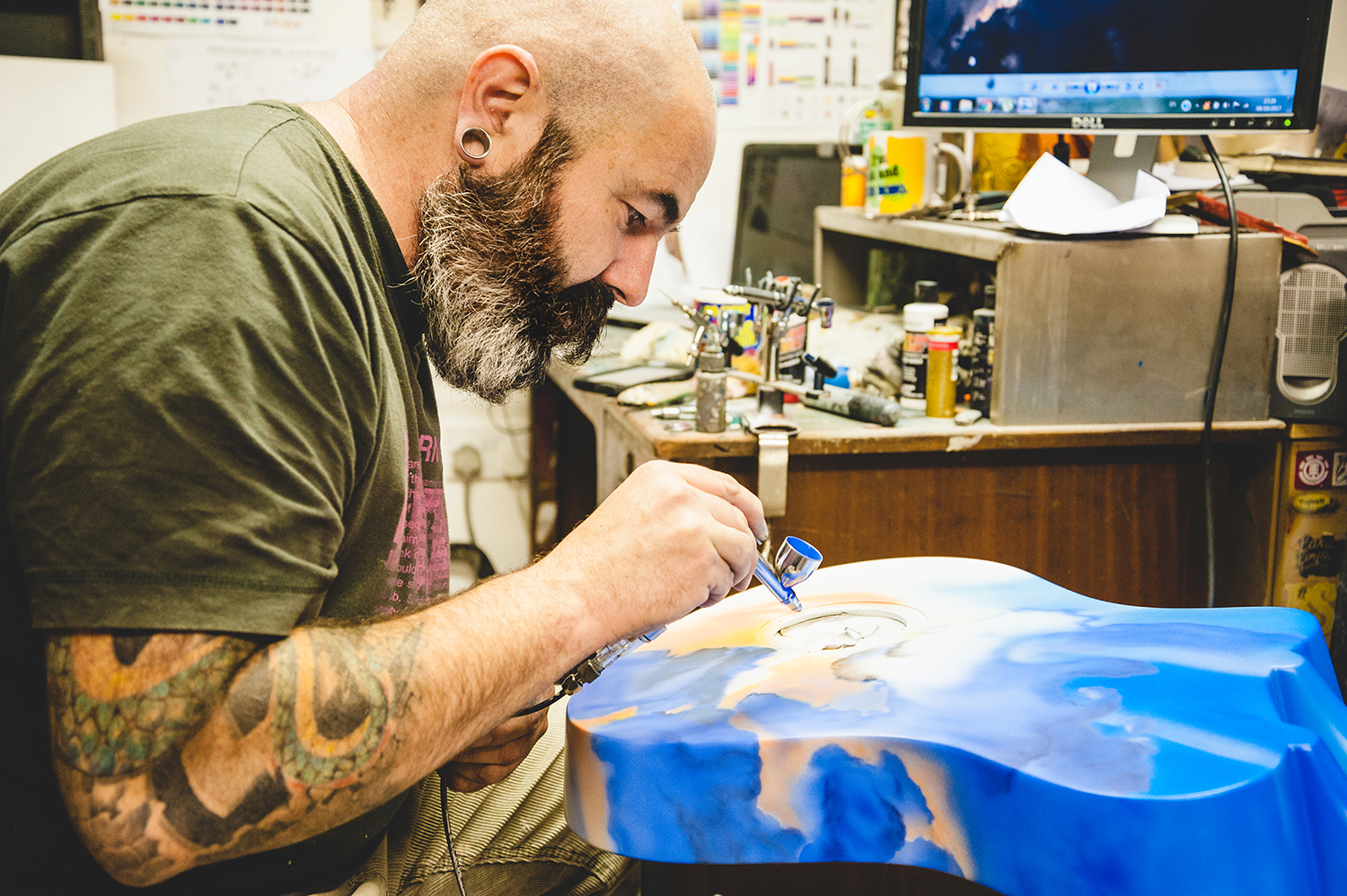 “As a lover of music, it’s a cool feeling knowing that musical instruments I have painted are being played in various corners of the globe and appearing in magazine and newspaper articles.” —Phil Atkinson

If you follow Emerald Guitars, it’s likely you are familiar with Phil Atkinson’s custom artwork. Some of Emerald’s most iconic custom guitars are the ones painted by Phil — The Star-Spangled X20, “Rosie the Riveter” Synergy X20 harp guitar, and “The Shire” X20.

Born in Dublin, and now based in Longford, Ireland, Phil’s creative journey started as a young child, when he was first inspired by his Grandfather’s pencil drawings, which he would copy. Encouraged by his teacher at Ashfield College in Templeogue, Dublin, Phil furthered his artistic growth by developing his skills with paint and color, which provided him the foundation to complete an apprenticeship in the art of tattooing.

Working part-time in the tattooing field and in the construction industry, Phil knew there was still something more awaiting him in the world of art and creativity. When Phil discovered and explored the medium of airbrushing, it immediately captured his attention and imagination, and he knew this was the artistic direction he wanted to continue pursuing.

“I started to teach myself the skill of using the airbrush, taking three years to fully understand its intricacies as an artistic tool. It’s there I found my niche.” —Phil Atkinson

Phil continued to expand and strengthen his artistic palette by enrolling in an art & design course at Longford College of Further Education, excelling in a variety of mediums including oil and watercolor painting, print making, and pottery. Phil’s strong artistic foundation and talent developed over those years, resulting in his work becoming known internationally through art exhibitions and shows, mural and project commissions, work in schools and community organizations, as well as his incredible custom paintings for Emerald Guitars.

Phil first connected with Emerald Guitars in 2016 when Alistair Hay, owner and founder of Emerald, reached out to him to ask if he would be interested in painting a guitar Emerald was building for well-known country singer Robert Mizzell. Robert was looking for an X20 6-string guitar with an image of an old worn American flag on it, so Alistair gave Phil full control of the artistic direction for the project. Excited and a little bit nervous about this very unique opportunity, Phil happily accepted.

“I hadn’t painted on anything but canvas for a while, so the idea of painting such an important guitar was very exciting. I’d never seen a carbon fiber guitar before, so I took some time to look at it properly and think about how I would approach the painting of it. The guitar was a super impressive piece of work.”

Because of the multi-faceted challenges of the project, Phil decided to approach it differently than other artists may have, and his approach set the stage for future custom Emerald projects. Becoming familiar with the carbon fiber material, Phil found that water-based paints worked best because of their strong pigments, which would not fade in light. In addition, the water-based paints would not react to the clear coat applied during the final stage of the guitar’s build.

The way Phil created his reference image for painting the American flag was very clever. He took an American flag his partner had from her time in Arizona and wrapped the guitar up in the flag, moving the flag around so that the stars, stripes, creases, folds, and angles lined up well, photographing the piece as he moved it around to create a set of photos which he could paint from.

“It was a slow start as I didn’t want to mess it up. I probably was a little too careful triple-checking everything before laying down paint, but that’s the perfectionist in me. The end results were great. I was really happy with the paint job, but still a bit nervous when it came time to return it to Emerald Guitars for finishing/lacquering and delivering to its famous owner.”

Seeing Robert’s response when Alistair unveiled his custom guitar, it was clear the work Phil had done was a huge success.

Robert Mizzell tours with and plays his “Star-Spangled” X20 custom guitar everywhere he goes. It was a real joy seeing Robert perform “I Walk The Line” live with his father, Richard Mizzell, on The Late Late Country Special this past May playing his custom painted X20.

Phil had never seen or heard of a harp guitar before, and combined with John Veld’s “Rosie the Riveter” vision for the project, Phil was really excited for this new artistic challenge.

John told me he was purchasing a guitar from Emerald Guitars, and he had seen my work on the Robert Mizzell Guitar. John wanted me to paint it for him, so he sent me some images of what he wanted, and, to be honest, I started getting very excited.

John wasn’t buying any old guitar, this was a Synergy X20 —a double guitar with a twist. Up until I started painting for Alistair, I had never even seen anything like this. I was intrigued, so I did some research and found the instrument had quite a big following.
–Phil Atkinson

This custom project combined several unique elements: the American flag, Norman Rockwell’s iconic “Rosie” image, and the 8th Air Force Emblem which honored John’s dad who served in the 8th in England during WW2, and also symbolized John’s own 9-year USAF career, which was also in the 8th.

The approach for painting the flag had become a familiar process at that point, but because of the fine detail that the “Rosie” image and the emblem patch entailed, Phil applied both his stenciling and his airbrushing technique. He created the stencils by first tracing the images of Rosie and the emblem patch, cutting them out to create the stencils, and then using the stencils’ guidelines to airbrush the images onto the guitar.

The lettering on the emblem patch was challenging, as lettering is not normally Phil’s favorite type of work. In this case however, he ended up enjoying the process, as he was able to bring out the detail of the patch’s embroidery, making it look very realistic as if the patch was actually embroidered right into the guitar.

Because of the challenging complexity of the project and the inspiring results, the “Rosie the Riveter” Synergy X20 is the most rewarding guitar Phil has had the opportunity to work on.

(You can read John Veld’s complete story of his “Rosie the Riveter” Synergy X20 here.)

Phil recently won an award from Airsick Stencils for his work on The Star-Spangled X20 and the “Rosie the Riveter” Synergy X20. The company was running a competition on their social media platforms asking for airbrush artists to post musical instruments they had painted. Phil posted the Robert Mizzell and “Rosie” guitars, and he was fortunate enough to be chosen as the winner!

“I very rarely win anything, so I was amazed when they contacted me and told me that I had won!” –Phil Atkinson

Phil also applied his stenciling and airbrush techniques to “The Shire” X20. The artwork was comprised of several highly-detailed elements — the Hobbit house, windows, and doors, as well as the image of Gandalf walking along the path.

Phil’s work with Emerald Guitars has inspired him to revisit and pursue past artistic interests he wouldn’t have moved forward with otherwise.

“I had always been intersted in painting motorbikes, helmets, and cars. I tried at one stage early on, but never ended up following through with it. After working with Emerald on their custom guitars, stretching and using my artistic abilities, I’ve recently been more active in trying to go back and break into that market. It interests me more now. If I hadn’t had the opportunity I have had with Emerald Guitars, I probably would’t have kept trying to pursue these other interests.” –Phil Atkison

To learn more about Phil and his custom artwork, visit his website, https://philatkinson.ie/custom-art-work/. Be sure to visit the blog on Phil’s website “How the airbrush became my artist tool of choice.” You can also follow Phil on his Facebook and Instagram pages.